For quite some time, I would have told you that my favourite programs out of Adobe’s Creative Suite were Illustrator and InDesign, respectively (depending on the task at hand). While Photoshop was the first program I ever used from Adobe, my personal projects and work projects land me in the other two programs far more often. After all, I’m a graphic designer, not a photographer. Nevertheless, after learning Illustrator and InDesign and finding them to be very intuitive and user-friendly, I harbored a bit of resentment towards Photoshop, believing it to be needlessly complicated and inflated to the point of being complete drudgery to work with.

But then, not too long ago, my partner and I discovered the joy that is Aaron Nace‘s Phlearn Photoshop and Photography Tutorials. We spent hours almost every evening for a few weeks watching the tutorials, and it seemed like a whole new world had opened to me. I’ve always been competent in Photoshop, don’t get me wrong. But suddenly it seemed like I could move from mere competency into proficiency. In fact, I must heartily thank Phlearn for making their valuable resources so readily available, as even little tips and tricks I’ve picked up from the show have been so helpful to me in my job as a graphic designer.

Particularly when working with stock imagery that’s close to what a client wants, but not quite.

Today’s conundrum in Photoshop Adventures, for example, was a client request to find a picture of two or industrial workers, not in business suits, wearing hard hats but not tool belts, preferably pointing diagonally up at something (the headline of the design project I’m working on for a client).

The closest image I’d been able to find was this one, from ThinkStock Photos. 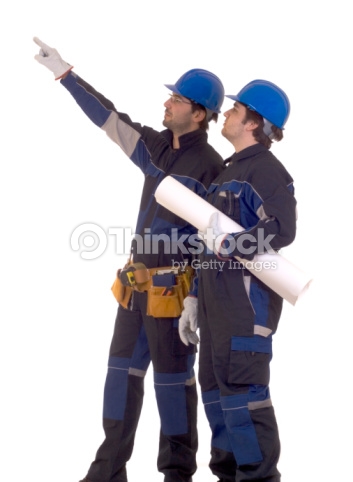 There were 2 problems I encountered:

As I was unable to find something that was exactly like what the client wanted, I decided to go ahead and try to Photoshop the image I had — something that even six months ago I’d have said was too complicated to complete in a timely fashion.

Luckily for me, this photo was one of a series with the same two men. I wanted to find an image of the man on the right, but closer to the angle of the man on the left, so I could sample the section of the suit without the tool belt. The closest thing I could find was this photo: 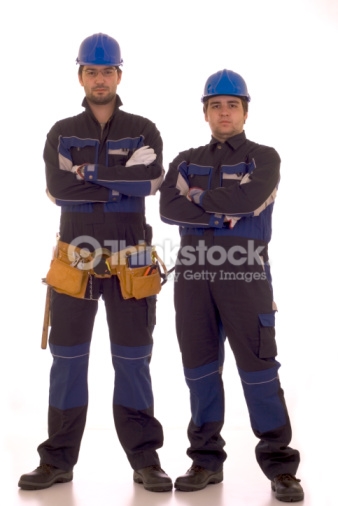 I copied the second photo over into the first, and created a layer mask for the section of torso I needed. Using the Transform tool, I warped and skewed the image to a close approximation of the man’s stance, then used the Liquify tool to clean up the edges a bit. I created a separate layer for cloning/stamping the edges to make sure everything blended well together, along with creating an adjustment layer for adjusting the curves so that it blended tonally with the rest of the image.

From there, I created a few more adjustment layers, adjusting the curves, levels, and hue/saturation as needed. I got everything looking pretty great except for the skin tones, which prompted me to create another adjustment layer and mask out just the section of the photo where the men’s faces are.

The final result, I’m proud to say, is this:

Total time it took? About an hour.

Many many thanks to Aaron Nace and the team at Phlearn for giving me the tools to approach and solve design problems!